What just happened?  We just witnessed a Satanic spectacle pretending to be a presidential inauguration.

We  just  saw Luciferian  Lady Gaga  who rode the “beast” in the Super Bowl. We just  saw Obama Hussein and his transsexual “wife”:  Big Mike AKA Michelle. We saw O’Biden,  accused by his daughter of  ritually raping her in the shower when she was growing up. We saw a long parade of Satanic Communist pedophiles  taking part in this District of Criminals Satanic ritual.

It seems that the human race is irrevocably dumbed down.  The purported operation by the military loyal to Trump to save this country did not go off exactly as  planned. So what? Anyone with a lick of discernment and historical knowledge  knows that any military plan goes off course about 5 minutes into it.

The  white-hats could have not been able to get control of the emergency broadcast system.  It could be that goals necessary to make a public announcement were not  met yet, and are behind schedule.  I don’t trust Steve Pechenik, but the man did say that Trump will be inaugurated on  January 21st.

It could be that the real plan is not what we were told. It could be that the plan is being carried out right now, and we are just not aware of it. In war many many things will never come out.  The famous quote is: “the first casualty of war is the truth.”

Sun Tzu’s “the Art of War” is much about deception and warfare.  The war that China is  waging  upon us, is based upon lessons in of the “Art of War”

I just find it hard to accept that Trump and  generals loyal to him abandoned the American people,  knowing full well that they  would likely  be  condemning  themselves and 350 million Americans to death.    What kind of threat or blackmail could  override  the lives  of hundreds of millions of people?

Perhaps the plans of Trump are different than what we were told.
There is  evidence that  Trump was not President and has not been President  in months.  There is evidence  he was tricked into  turning  the government over to FEMA in a Continuity of Government action, and that Trump has his  his man as head of FEMA.   Therefore the Biden swearing in was meaningless. because FEMA has not to my knowledge returned the power to run this country back over to the president  and the Congress.  We are in “the Fog of War”  and it is expected that facts and truth  become a  thing of the past.

Will our nuclear submarine commanders  recognize the authority of Satanic demon O’Biden?    I have a hard time with that also.   I  certainly would not if I were a sub commander.   That would be turning over the keys to the kingdom to “Domestic enemies” and Satan.

Trump like Obama could be  planning to use his influence out of office using a different tact.  I do not think that this is over by a long shot. The stakes are too high.  Perhaps the workable plan has been changed to another tact:

Trump Gives Farewell Speech: ‘The Movement We Started Is Only Just Beginning’

I  find it hard at this time to believe that Trump and his generals have thrown us to the wolves.  Perhaps he has, I am not wedded to any theory of what is going on.  The fact that he did not pardon  Julian Assange   makes me more  open to the possibility that Trump was compromised.  I hope I am wrong.

Perhaps Trump was just a coward and did not have the stuff to go forward.
We will not know for years if ever, exactly what may have transpired.

“Lord Lucifer ‘  whom many of these people went to Antarctica to swear allegiance to, has some tricks up his sleeve. This is very far from being over.

“When you go to war against your enemies and see horses and chariots and an army greater than yours, do not be afraid of them, because the Lord your God, who brought you up out of Egypt, will be with you.”
~Deuteronomy 20

I have not listened to this as of yet:

Situation Update, Jan 20th – Day of Reckoning: Will the republic DIE or be REBORN?

Steve Quayle interviews Henry Gruver at GenSix Studios concerning Henry’s death experience in which he was taken on an amazing journey through the cosmos before being returned to life in his body.

Steve Quail: We Are Under Full Scale Communist Siege – Infowars

Tucker Carlson : Democratic Party is planning a war on half of America

Weapons of War On Our Streets: A Guide to the Militarization of America’s Police – ammo.com

Democrats in the House are Already Working on Forcing You to Register Your Guns – bongino.com

THE CHICOM MILITARY INSURANCE POLICY TO PROTECT BIDEN-HARRIS IS IN PLACE AND IS READY TO ACT!  –  Dave Hodges

Germany Plans To FORCE People Who Won’t Quarantine Into CAMPS, Why Does This Seem So Familiar?? -Timcast IRL

2,000 National Guard Troops in DC Sworn In as Special Deputy US Marshals – theepochtimes.com

Pompeo: “China is already within our borders” – Mike Adams

The New mRNA COVID Vaccines Inject an Operating System into Your Body – Not a Conspiracy Theory, Moderna Admits It – Vaccine Impact

FWIW I  recently switched to the Brave  Borwser ,  and am very happy with it. ~MFP

America Up In Flames Like Democrat-Run Cities Across America Is The Left’s Goal For Joe Biden’s Presidency: History Proves The Radical Left Have Long Conspired To Rule Over Us All While Engineering Chaos –  allnewspipeline.com

It looks like O’Biden was hard at work destroying your gun rights even before the fake Satanic swearing in ceremony today.   The gun sales site “Armslist” is now in deep state control and intent in destroying what few  remaining  God given and 2nd amendment protected rights we still  have.   The God Inspired US Constitution is the target of these Satanists, and they plan to slaughter us wholesale if we are dumb enough to  give up our guns. ~MFP
This is what I ran into today at Armslist: 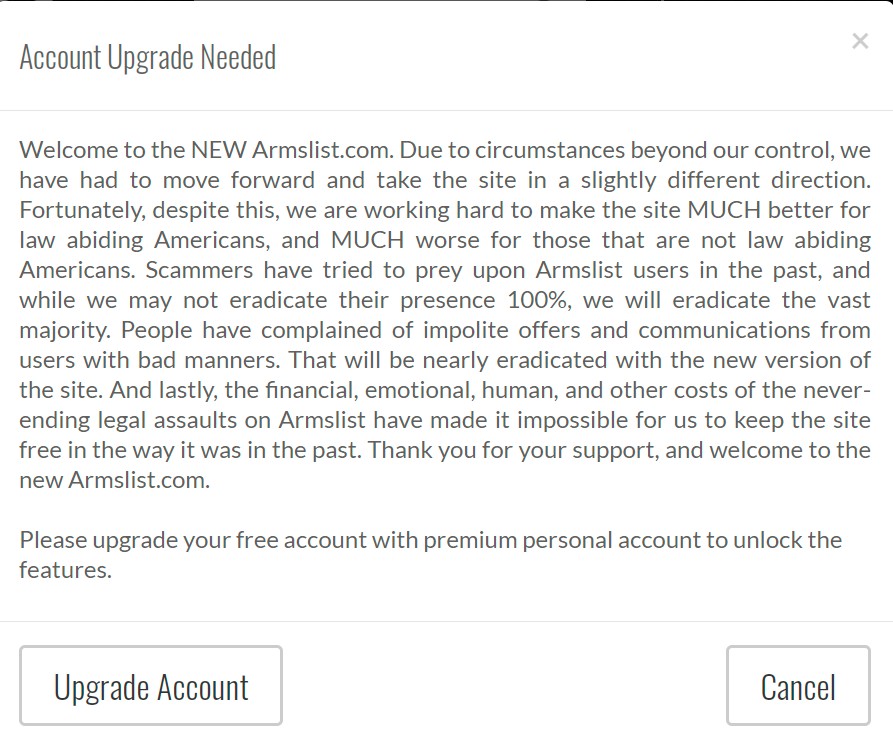 A DELETED BILL GATES DOCUMENTARY HAS BEEN REVIVED – BitChute

All 4 nurses in a Kansas county’s health department refused to give out COVID-19 vaccines – businessinsider.com

INTERVIEW: How Biden Will Use Technocracy to Destroy What Is Left of America-Patrick Wood and Dave Hodges – Dave Hodges

‘Really quite shocking’: Inside the ugly transition at the Pentagon – politico.com

One Reply to “January 20, 2021 Breaking news and thoughts: GET READY FOR A 10 DAY MILITARY LOCK-DOWN FOLKS – DETAILS TO FOLLOW WITH THE EMERGENCY BROADCAST SYSTEM. THIS IS NOT A TEST! ~MFP”