MFP Commentary:
IMHO,  what this book does so well  is to elucidate  the founding principle of this country expressed in the Declaration of Independence: The fact that we are sovereigns, therefore we have no king, nor are we slaves.  This also happens to be the real definition of the 1984’ed word “Anarchy”.    The recent government demonization and changing  of the word (as they did to words in the dystopian novel 1984) is proof positive that our criminal government despises our founding principles, and will do anything to obfuscate the facts and confuse the general public.

I think that you will also enjoy the book “freedom” by Adam Kokesh is free in both text and audio versions, here.  Think of it as the cliff notes for Rothbard’s book.
~MFP

In For a New Liberty: The Libertarian Manifesto, Rothbard proposes a once-and-for-all escape from the two major political parties, the ideologies they embrace, and their central plans for using state power against people. Libertarianism is Rothbard’s radical alternative that says state power is unworkable and immoral and ought to be curbed and finally abolished.

To make his case, Rothbard deploys his entire system of thought: natural law, natural rights, Austrian economics, American history, the theory of the state, and more.

It is relentless, scientific, analytical, and morally energetic—a book that makes an overwhelming case. Indeed, it gave an entire movement its intellectual consciousness and earned Rothbard the titles “Mr. Libertarian” and “The State’s Greatest Living Enemy.”

Society without the nation-state? Rothbard shows that this is the way for peace, prosperity, security, and freedom for all. In the entire history of libertarian ideas, no book has more successfully combined ideological rigor, theoretical exposition, political rhetoric, historical illustration, and strategic acumen. Rothbard poured a lifetime of research and all his intellectual energy into this project and he succeeded in writing a classic.

The book is the result of the only contract Rothbard ever received from a mainstream commercial publisher. He was asked to sum up the whole of the libertarian creed. Looking at the original manuscript, which was nearly complete after its first draft, it seems that it was a nearly effortless joy for him to write. It is seamless, unrelenting, and full of life.

He cut no corners and pulled no punches. It appeared in 1973 and created a whole movement that set out to crush the political monopoly.

From the day the book went out of print, the phone calls and emails started coming into our offices, hopeful of a new edition. Thanks to benefactors who have made it possible, this new edition from the Mises Institute is hardbound, beautiful, and affordable.

In subject after subject, this book is informative, bracing, and challenging. It also features the characteristically clear writing style for which Rothbard is famous, which stemmed from his organized thinking and passionate drive to teach and change the world.

The book begins with American history to show that the revolution of 1776 was the most libertarian of any in history. The pastors, pamphleteers, and statesmen who led it held that the state has no rights that the people themselves do not possess. They demanded full liberty, not some truncated version that existed in the old world. In this discussion, the reader comes to appreciate the founders of the United States of America as never before…… Read More 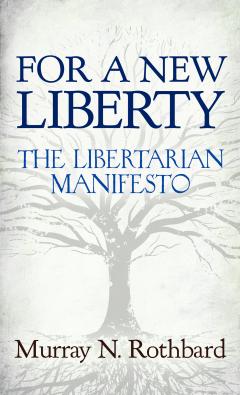