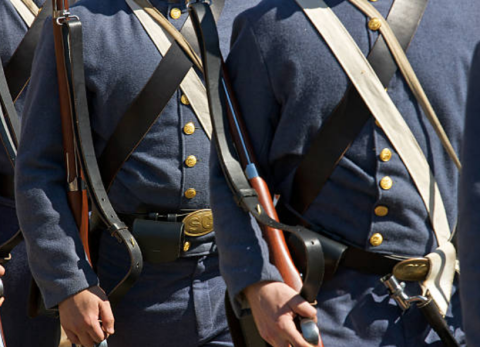 I donned [the uniform] and set off for Cincinnati on horseback. While I was … imagining that everyone was looking at me … a little urchin, bareheaded, barefooted with dirty and ragged pants … turned to me and said “Soldier! will you work? No sir-ee: I’ll sell my shirt first.”1

This attitude, Richard Bruce Winders explains in his history of James A. Polk, “illustrates the image of soldiers, common in the 1840s, as slackers on the public dole.”2 Indeed, even as late at 1891, a speech published in the Christian journal The Churman recounted Grant’s anecdote and concluded “the national contempt” for the army was based on the fact “it is ‘such a lazy life.'”3

Nor did such attitudes begin in the 1840s. In his biography of George Washington, Mason Locke Weems notes the lack of concern over American casualties suffered under Anthony Wayne in a battle with the Shawnee in 1794:

However, after the first shock, the loss of these poor souls was not much lamented. Tall young fellows, who could easily get their half dollar a day at the healthful and glorious labor of the plough, to go and enlist and rust among the lice and itch of a camp, for four dollars a month, were certainly not worth their country’s crying about. [Emphasis in the original.]4

The Militia vs. The Federal Military

This general contempt for soldiering wasn’t applied to all soldiers. In nineteenth century America, it was considered honorable to be a militia man — a part-time soldier tasked with protecting one’s community from raiding Indians and gangs and thugs. It was something else entirely, however, to be a professional, full-time soldier. Those people, it was commonly felt, were indeed what we today would call “welfare queens” living off the hard work of American taxpayers. In other words, for Americans of the time, it was laudable to take up arms in defense of one’s community. But one was also expected to get a real job.

[RELATED: “Why We Can’t Ignore the ‘Militia’ Clause of the Second Amendment” by Ryan McMaken.]

Put another way, the militias were one thing. The “standing army” was something else entirely.

This isn’t surprising given the general disdain for standing armies in early America. The fear and contempt for standing armies was the primary motivation for the Second Amendment — an amendment designed to encourage and protect local militias and the ownership of firearms outside of federal control. According to historian Marcus Cunliffe, this attitude goes back to the days of American resentment over British regulars being quartered and fed using the using the housing and food of American civilians. In many cases, Americans begrudgingly tolerated the imposition, but after the Revolution, this attitude toward professional soldiers was simply transferred from British troops to American federal troops.5

Indeed, even members of the military were aware of their semi-pariah status.In a speech to military cadets, officer Benjamin Butler concluded in 1849 that, “large standing armies” are “productive of needless expenditure; injurious to the habits and morals of the people.” Even within military families full off federal officers, one brother might advise another in 1845 that “I by no means desire that my sons should ever wear a sword. I would certainly prefer that they should become honest, industrious mechanics.”6

This would echo a common sentiment of the period that even for those who did spend some time as a professional soldier, it was best to use “every kind of negative and positive inducement” to encourage a soldier “to turn himself back into a civilian before it was too late.”7

In practice, of course, few Americans ever had to deal in person with any of these federal officers they so disdained. As Cunliffe notes,

Americans in many areas had no idea what a regular officer looked like. Regular soldiers existed for them only as caricatures — the enlisted men as drunkards and “mercenaries,” the officers as haughty “aristocrats.”8

Decades later, the rarity of federal officers remained a point of pride for critics of the standing army up until the First World War. In a 1914 semi-humorous editorial in Collier’s magazine titled “Why We Cannot Have a Standing Army,” George Fitch is grateful the United States is not like the Old World where “working people of Europe must” support millions of soldiers “in idleness.” In America, Fitch happily reminds his readers , “millions of people live and die without seeing a member of the regular Army.”

When forced to deal with a standing army, however, Fitch suggests the soldiers be equipped with rickshaws and “plac[ed] at the service of the public” so that the taxpayers might go “joyriding” and thus more easily endure the burden imposed by the “armed hordes.”9

Such rhetoric in the mid-nineteenth century would have been extremely commonplace. But in the decades following the Civil War, the sheer number of military veterans — combined with the fact their state militia units had been mostly federalized in the conflict — meant soldiers more commonly came to be regarded as objects of reverence rather than suspicion. It was just one of the ways the United States became “federalized” after the Civil War. Military service became less about service to one’s particular community, and more about national service. This change was helped along by federal legislation which blurred — and eventually all but abolished — the line between state militias and the federal military. Today, the militias have been transformed into the National Guard and made de facto permanent instruments of federal military policy. The distinction between the “citizen soldier” and the professional hireling been almost totally erased, and there is no longer any cultural mandate to suspect federal troops of wasting the taxpayers’ hard-earned cash. Indeed, the taxpayers are often now expected to thank the soldiers for doing a service the taxpayer already pays handsomely for.

Our nineteenth century time traveler would find this state of affairs to be very odd indeed.