The FBI is one of the most criminal, terroristic, groups that the world has ever known.  Please do your due diligence:

WHO IS SCHAEFFER COX?

MFP Commentary:
A word of warning, do not talk about the vaccine  reality to the management at Fordland medical clinic or you like me may be illegally  banned from using the facility like I was.  As things stand I have no access at all to affordable dental  care due to the  inhuman actions of one Sonia Cass at the  Fordland Medical Clinic.  They do not care about your health at this clinic. They are much more interested in enforcing blatantly illegal Federal health mandates. (such as pushing dangerous vaccines, mandatory dental x-rays  & creating victim disarmament zones)  If you speak up they will even  go to to the extent of denying dental care to the elderly, as they have myself.

Read about that story here:
MEDICAL TYRANNY at the Fordland medical clinic?
~MFP

We are constantly told that vaccines are safe and effective and that there’s nothing to worry about. This simply isn’t the case, and it’s a hard-to-swallow truth that many people refuse to acknowledge. Mass marketing campaigns portray vaccines in a ‘God-like’ light, and the science is being ignored. The truth is that vaccines are actually exempt from double blind placebo controlled studies and they have not been put through appropriate safety testing. Furthermore, a number of concerns have been raised about vaccine safety by a number of scientists arounds the world. I like to use aluminum as an example. A study published in 2011 makes the issue quite clear, stating, “Aluminum is an experimentally demonstrated neurotoxin and the most commonly used vaccine adjuvant. Despite almost 90 years of widespread use of aluminum adjuvants, medical science’s understanding about their mechanisms of action is still remarkably poor.” Fast forward nearly a decade later and scientists have now shown that injected aluminum does not exit the body, it actually sticks around and gets carried by specific cells into distant organs and into the brain where it can be detected after injection (source)(source). Multiple studies have emphasized these findings, and the studies do nothing but trigger silence from big pharma as well as our federal health regulatory agencies…..Read More

MFP Commentary:
To the best of my knowledge most of the vaccines produced by big pharma contain aluminum as an adjuvant.   The Fordland  Medical Clinic pushes these dangerous and untested vaccines, regardless of health implications because they receive Federal money.  Sort of reminds me of the biblical story of Judas Iscariot and the 30 pieces of silver.  The moral of the story seems to be that it’s OK to kill and harm  people just so that the government says it’s OK and pays you for it.

FWIW I am heavy metal damaged and also aluminum damaged.  The AMA doctors at the clinic are so poorly trained that they don’t even believe it exists.  When I brought in the evidence of this they ignored it. In fact their dismissal of me as a patient because I  exercised my free speech, looks very much like I was fired because I am heavy metal damaged and may have exhibited some of those symptoms.
~MFP

Family of vaccine-injured girl tell the gripping story of how a determined mother discovered an herbal formula that helper her daughter remove heavy metals from her body and, in the process, experienced a reversal of her neurological disability. 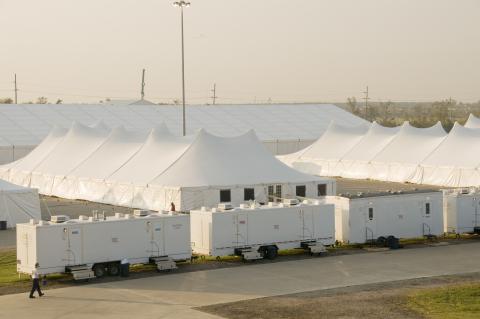 Back in previous Central American immigration invasion, I documented, over and over, the UN troop presence in our country with photos and eyewitness accounts. Very few people cared. The UN was still perceived as a “helpful, peaceful organization”. Forget the fact that the UN stood around and observed 1 million Rwandans executed, many times right in front of them. The UN Peacekeepers, as they are ironically called have emerged from their hiding places (eg abandoned military bases) are positioned for immediate action in order to seize control of the United States government (see the Q-Alert, below. as well as the previous reports on the CSS) over the past 4 days).

This week I am going to write about the intentions of the United Nations if they are successful in a coup to replace Donald Trump and Mike Pence. If and when the American people object, The UN has plans for these milions of American dissidents. They are already armed with lists, obtained by the Deep State-controlled NSA. It is a naughty and nice list. All Americans have a threat matrix score and everyone is categorized, as Steve Quayle so aptly describes as “Red list, Blue list, Green list”… This is a multipart series which will demonstrate, with irrefutable documentation what lies in America’s future. Each article will present a means that the UN plans to rid America of anyone who is deemed to be uncooperattive. The UN has had the previous complicity of nearly every federal agency. Please note that the rank and file of these agencies are made up of good men and women. However, as one federal law enforcement agent told me, “we cannot trust anyone over a GS-15 (with the implication that these people were largely Obama-era communist appointees), we know where the domestic ISIS base camps are located, we know where the child sex trafficking factories are, but we are prevented from doing our jobs”.  …Read More

MFP Commentary:
This correlates with my  experiences of the medical care at the Fordland Medical Clinic.  Several employees  there  have confided in me that they never use the mercury containing multi dose vaccine vials on family members BUT they use them on you and your children.    I also have a family member that is an MD that has confided to me multiple times that they do not play by the same rules as the rest of us do.  One thing that MD’s almost universally do is to hide the fact when they visit a psychiatrist or take  psychotropic drugs.  This is a very widespread   among MD’s.

Another study published in 2012 showed that 9% of pediatricians and 21% of specialized pediatricians deviated from CDC vaccination guidelines for their own children, mostly balking over newer vaccines introduced since 2009 such as human papilloma, meningitis, hepatitis and influenza vaccines.

Concern was expressed over a 2018 outbreak of the measles in Japan.  But horrors, it turns out only 100 cases were reported at the half-year point.  In 2019 another measles outbreak in Japan has been reported, affecting 167 children, almost all who were unvaccinated.  All this means is that these children developed antibodies naturally rather than by injection of the measles virus with all of its accompanying heavy metal (aluminum, thimerosal/mercury) adjuvants to provoke an immune response…..Read More

5G Cell Phone Radiation: How the Telecom Companies Are Losing the Battle to Impose 5G Against the Will of the People

The telecommunications companies and the mainstream media would have you believe that the race to roll out 5G is unstoppable. That you are nothing and no one in the face of a lethal multi-trillion-dollar agenda imposed by some of the most powerful entities on the planet.

They thought that if they called their new, alleged “communications technology”, adapted from the military Active Denial Technology, “5G” or fifth generation, the public would just assume that it was more of the same as 4G, 3G or 2G. And if they could characterise the rollout as a race, the public would not have enough time to find out what a killer technology 5G is. How wrong they were! Not only has the public found out, but now they know how lethal previous generations of wireless technology – to be used concurrently with 5G – are as well.

Below is the evidence from a number of different countries that the pushback is huge and growing. The telcos have lost the propaganda war, despite their control of the mainstream media, from which not a whisper of the dangers of 5G is heard, and of social media and Youtube, who have been desperately deleting millions of accounts to silence the naysayers.

As this article went to press, support arrived from an unlikely source. In an impassioned speech before the United Nations General Assembly on 24 September 2019, UK Prime Minister Boris Johnson stated that digital authoritarianism is not the stuff of dystopian fantasy but of an emerging reality. He described the Internet of Things, “smart” cities and AI as a giant, dark thundercloud lowering ever more oppressively over the human race, a gathering force reshaping the future of humanity over which the human race has no control and from which, in future, there may be nowhere to hide……Read More

Order says emergency ‘will come with little warning,’ cites ‘threats within the Homeland’

In an unprecedented move, President Trump has activated the U.S. Marine reserves to respond to an “emergency within the United States,” citing “threats to the Homeland.” Alex Jones breaks it all down live!…More Here

MFP Commentary:
I hate to be the bearer of bad news but….. if the bad days are not already here they are not too far off. Do you think that the “church” will ever wake up? For that mater is anyone going to wake up?
~MFP
Related Story:
NOW, DOES IT MAKE SENSE AS TO WHY EX-MILITARY AND INTEL ARE MOVING TO THE OZARKS?

Since I put the “all-call” out to American truckers loyal to America requesting information regarding the transport of UN forces and/or equipment on US soil, I have received dozens reports of UN troop and vehicle transport from 18 states. Some people professed an ignorance to the danger of what they were seeing until they watched the following video. I produced following a John Moore-Paul Martin revelation of mass sightings of UN transport late last week. Initially, we lacked specifics, so I produced this video.

The United Nations occupation of America, for nefarious purposes was actually rehearsed by the Obama administration in a drill that became known at Jade Helm 16. As Michael Savage’s show says in their bump-in introductions, “Danger….psychological nudity…” In other words, the truth can be painful. The rest of this article is not for the faint of heart because your enslvement was rehearsed in great detail and with great precision in 2016 by the Obama administration prior to leaving office. ….Read More

An outright frightening dossier released by a former senior United Nations official reveals that United Nations employees have carried out over 60,000 rapes in just the last decade. What’s more, the dossier estimates that the organization currently employs at least 3,300 pedophiles.

In just ten years, under the guise of rendering aid, the United Nations has literally been raping and pillaging countries across the world. The problem has gotten so out of hand that it prompted the former UN insider, Andrew Macleod, to blow the whistle and hand over the evidence to Britain’s Department for International Development (DFID) Secretary Priti Patel.

According to the exclusive report by the Sun, the dossier reveals that on top of the 3,300 pedophiles working for the organization, thousands more “predatory” sex abusers specifically target aid charity jobs to get close to vulnerable women and children.

According to Macleod, anyone who’s attempted to blow the whistle on the horrifyingly rampant abuse is silence and fired….Read More