By the World Mercury Project Team

American consumers, particularly parents, should be asking some hard questions about why the American Academy of Pediatrics (AAP) and Immunization Action Coalition (IAC) apparently have no interest in improving vaccine safety. In the face of snowballing vaccine scandals—from fudged safety trials that use other vaccines as placebos, to persistent use of neurotoxic aluminum adjuvants, to the accelerated rollout of unproven vaccines that may be causing more problems than they solve—these and other vaccine advocacy organizations are not only turning a blind eye but are actively circling the wagons while beefing up public relations (PR) intended to stifle discussion. These PR efforts are on revealing display in an April 2017 IAC webinar on “Vaccines and the New Administration” that unsurprisingly singles out the activities of the World Mercury Project and its Chairman, Robert F. Kennedy, Jr.  Expressing equal parts alarm and disdain, the AAP rhetorically asks, “Vaccine safety: here we go again…?”

Due to the well-funded medical-pharmaceutical-media apparatus that endlessly repeats the mantra that all vaccines are safe for all people all the time, it is nearly impossible to get a fair hearing for common-sense questions about vaccine safety, no matter how urgent such questions may be. The biases apparent in mainstream discussions about vaccine safety have come into even sharper focus since the changeover from one political administration to the next. In February 2017, shortly after the inauguration, several hundred national and state-based organizations rushed to sign a letter lobbying President Trump to “redouble” efforts to drive up the vaccination rate. The IAC and the AAP were two signatories of that letter, which summarily dismissed concerns about vaccine risks as “disproven.” … Read More 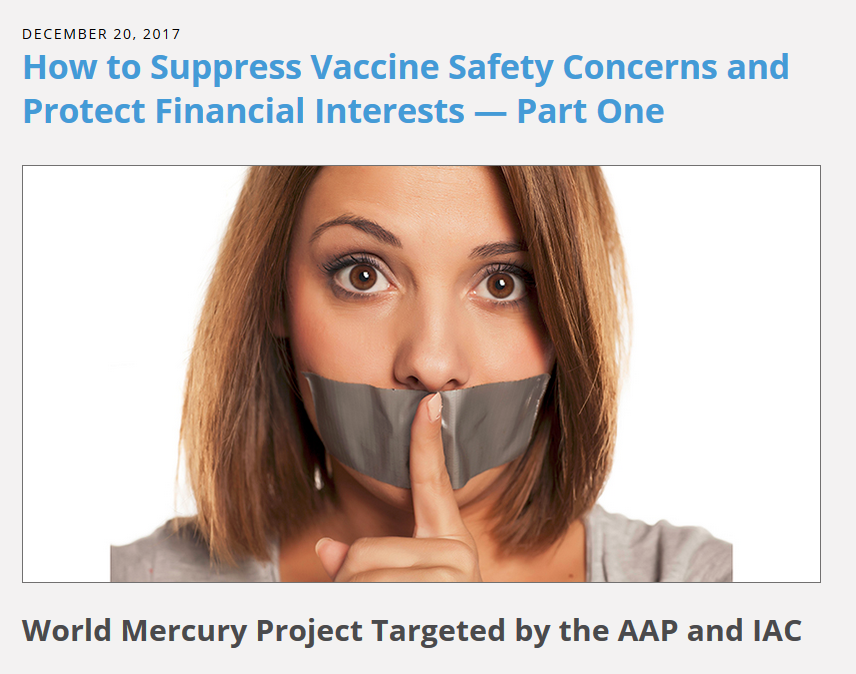