Skip to content
I can vouch for this woman’s characterization that homeless shelters treat their “clients” like shite. Especially the “christian” run shelters that I have been unfortunate enough to have had to visit when it got too cold on the outside. I finally just abandoned them. They were dangerous to you physically, and emotionally. Then on the outside you had to deal with the terrorists that wear the blue costumes. The ones that cause you to have PTSD, and become an alcoholic to deal with the insanity of the situation where the people that are supposed to protect your rights, instead dehumanize you, destroy  your belongings, beat  you for fun, and overall terrorize you.
It is “modern Christians” that contribute greatly to the homeless problem in their stubborn rejection of the free market, and protecting people’s rights as a “Republic” like ours should, and does not. Their support of the laws “to protect us”,    instead keep the poor from  getting both dental care, health care, and decent food. If you don’t understand my last quip, it is the regulations that are supposed to protect you, that price things out of the reach of the very poor.
They support the state kidnapping your children with zero due process, or even   a jury trial, and you are too poor to give much, if any of a fight. Again in large part because of laws that are supposed to protect you. i.e the BAR monopoly.  My ex wife ( a christian)  was  terrified  when  I  would approach, as I often did, homeless people on the street. Not a very good  example of following the greatest commandment and it’s typical.
“‘Modern Christianity” is in large part is a Satanic infiltration of Christs admonishment  that we should embrace the greatest commandment, and is a control mechanism to keep people in fear of burning eternally by the guy that loves them so much. That is all that seems to matter to most “Modern Christians.” Not justice, nor the greatest commandment.
Having lived homeless for many years. I think I know that I am talking about.
~MFP 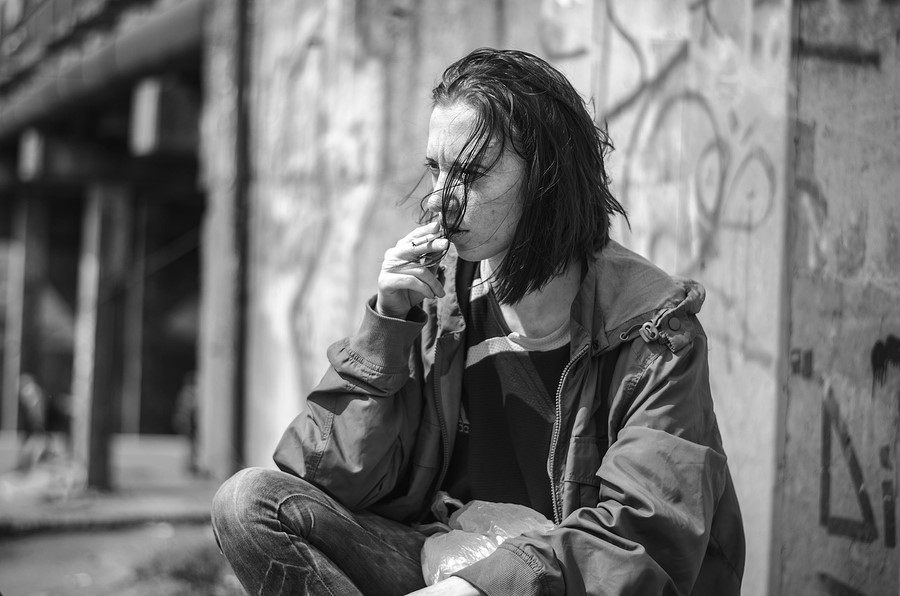 Everyone seemed to be in a good mood in this upscale downtown area where I was meeting my sons for lunch. Many were dressed in their holiday best, and there were families everywhere; children giddy with glee as they undoubtedly were looking forward to opening presents soon.

Since I had to park quite far away from the restaurant where I was to meet my sons, I had a few blocks to walk.

At one corner, a woman who was sitting down by herself and talking caught my eye for just a moment. She was on the other side of the street, so I did not get a close look at her.

“Why is she talking when she is all alone?,” I quickly thought, but I was late for lunch and I pushed the thought to the back of my mind thinking “she probably has an earbud on and is talking on the phone to someone.”

Later, as we were finishing up our lunch on a table that was outside in front of the restaurant (the restaurant was very busy, and the only table available was outdoors as it was quite cold out), a woman walked by that caught my eye.

She was not neat – she was dirty, carrying a backpack, smoking a small stub of a cigarette that I guessed someone had discarded, and had multiple layers of clothing and jackets on, well worn and dirty. I later learned she was in her mid 40s, but she looked older than that.

She noticed me looking at her, and said to me: “God bless you! Jesus has redeemed me, and God is the God of second chances.”

I replied: “Amen! He certainly is the God of second chances. God bless you too.”… Read More